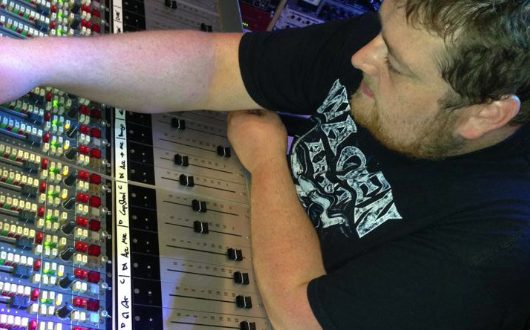 BEN HAMMOND: A Change of Scenery

We all have to deal with different environments in this job – this week alone I’ve had to deal with marquees, clubs, and outdoor amphitheatres.

This change of scenery is something we get used to as a matter of course, but what about when it comes to changing from the PA speaker to the iPod headphones?

One thing I often have the pleasure of doing is mixing live recordings – be it B-sides, audio to be synced to live footage, or a live album, I have been lucky enough to have mixed live recordings for Shed Seven,The Blackout, and Skindred, among others. Currently, I’m mixing tracks for Deaf Havana, mainly from the ‘Evening With’ acoustic tour that we did back in April this year.

You often hear the argument that “live guys cant mix records,” and vice versa. Personally, I think this is rubbish! Mixing audio is the same skill whatever environment you’re in – you might get in a car with the indicators on the other side to yours, but you can still drive. Elements may change, but the core skill remains the same.

With these Havana tracks I wanted to achieve the same clarity, intelligibility, and tonal qualities that I had with the mix on the night, but most importantly I needed to retain the atmosphere the band created on the night that had the audience’s hair standing up. We worked really hard on the show to achieve a kind of ‘watching your favourite band live in your living room’ vibe, while still being set in grand and ornate venues. Capturing this ‘setting’ was key to the recordings, and to try and do this we used alot of carefully placed ambient mics in an attempt to get the wonderful colour that these venues provided to tape. This was something we could have never recreated back in the studio, so capturing this ambience was critical.

In addition to this we also put up a lot of extra mics on the acoustic instruments to provide an additional option to the DI feed. This meant I had my usual tools I needed to mix the show in the live environment, but I was tracking a load of other flavours so I didn’t need to try and replicate things in the studio. I had what I needed honestly captured on the night.

For the actual recording, I used a Dante card in the IDR64 of the Allen & Heath iLive system I was using. I’ve found this to be so simple and stable in the past. One cat5 cable connected the Dante card to my laptop, where Reaper recorded the audio. I’ve used Reaper consistently in the past in conjunction with the Audinate Virtual Soundcard and Controller, as it just seems to work. It’s never hung, or given me any issues. So really, all in, a very simple system.

With all the technological advances in digital technology, gone are the days of needing record trucks, as multitracking high track counts has become very easy – something the FOH engineer can “set and forget” himself. I spoke to Jon Burton, FOH engineer for The Prodigy about recording the audio for their live shows….

“Recording any band live is often a question of speed and reliability. I record most Prodigy shows as multi-tracks on to a JoeCo Black Box Recorder. This has the great advantage of being very simple and stable. The files are stored on a 32Gb USB memory stick and I can then chuck that in my laptop and start getting the mix together back at the hotel. Most of the live recording mixing is done on the road with my laptop and a pair of headphones. This is not ideal, but is dictated by the fact that I usually need to be able to provide a rough mix by the next day, and a finished mix within just a few days.

"Most live recordings are to accompany video footage and are destined for YouTube, however they still need to be mixed to as high a standard as possible. I will drop the files into Logic and check everything is there, then start organising tracks. I have some presets stored in Logic for channel settings and a basic template that speeds things up. I will then go through the donkey work of cleaning up spill, which can be huge, on the tracks. Mostly I will only be mixing one song in the set so I will edit that section out, leaving a large bit of audio either side as I never know where the visuals will start. I will then laboriously go through all the tracks building up a mix.

"After I have done a rough mix I will send that to the director, who will use it to cut the video to. I will then go back on my next day off and finish the mix. Most mixes come back with a few minor requests, the one I dread being ‘Can you do something about the swearing?’ Maxim has a voice like a foghorn and most microphones on stage will pick up his expletives so the answer is usually no!

"I will always try to get into the studio to check my mix, but sometimes this just isn’t possible so I do rely heavily on my HD25s.”

In short I think this shows the amount of work that now rests on the FOH engineer. In the past this work may have been completed by a team of many people – now it mostly lies on us to carry this work out. With the combination of ease and availability in digital recording technology, and ever shrinking budgets, twinned with tight deadlines for bonus material to keep the ever needy social networks interesting, it is more important then ever that we can be flexible and apply our skills to the many different areas needed.

Do you think you have what it takes to be an Audio Pro International contributor/columnist? If so, send some information on your background in the pro audio industry, as well as some article ideas to API editor Adam Savage via adam.savage@intentmedia.co.uk.