Home / New Gear / PLASA 2012: The end of an era
Earls Court closes its doors for the last time on PLASA show

Last week’s PLASA 2012 show marked the end of an era for the London show, as it prepares to relocate from Earls Court to the ExCeL Centre in 2013.

Despite attracting fewer visitors than last year, this year’s attendance topped 11,500 (subject to ABC audit), 25 per cent of which was made up of overseas visitors.

The major success story of the PLASA show’s final residence at Earls Court was its Professional Development Programme, which saw more than a 100 per cent increase on last year’s seminar registration figures. Among the most popular of this year’s sessions were those hosted by audio broadcast specialist and Audio Pro International columnist Toby Alington, whose seminars on Adele’s famous Royal Albert Hall performance and this year’s Diamond Jubilee Concert drew in substantial crowds.

Other major highlights included the sessions covering the London 2012 Olympics Ceremonies, which were presented by technical director Piers Shepperd and attracted over 550 attendees.

"The PLASA 2012 organisers would like to thank all the contributors for their invaluable input. Through their effort and commitment, the Professional Development Programme has become an integral and unmissable part of the PLASA experience and promises to go from strength to strength at our new home in 2013," said show manager Sophie Atkinson.

Commenting on the move across the capital for next year’s show, PLASA CEO Matthew Griffiths stated: "ExCeL is a cutting-edge, purpose-built exhibition venue with the infrastructure to attract international markets. Its world-class facilities are the perfect match for PLASA’s planned investment in content and growth and an exciting prospect for the entertainment technology markets worldwide."

Among those who share Griffiths’s sentiments is Adam Hall’s Andrew Richardson, who added: "I’ve attended ExCeL for many exhibitions and it’s set up in a much better way to handle big exhibitions. A venue with an airport within walking distance has to be a good thing – PLASA is an international show."

The ExCeL Centre proved to be a key success at the London 2012 Olympics, as it is located a five-minutes drive away from London City Airport and is well served by the London Docklands Railway. It is also just 30 minutes away from the West End via the Jubilee line and the recently opened cable car system has direct links to the O2 Arena.

Furthermore, the PLASA show has reported that 65 per cent of the floor space for PLASA 2013 has already been reserved.

To register for updates on PLASA London 2013 and to receive a FREE invitation in January 2013 visit: www.plasashow.com 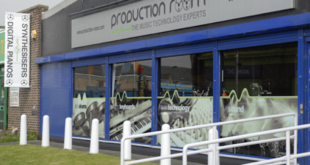